You are here: Home1 / Publications2 / Towards a Low Cost Adaptation of Educational Games for People with Dis...

Can we reduce the cost of accessible serious games? 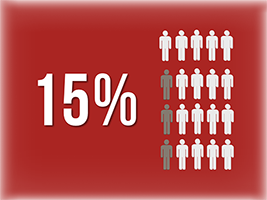 Percentage of world population with any sort of disability. Source: World Health Organization

Beyond any doubt, video games play a very important role in digital entertainment today, and increasingly in other fields such as education. However, the number of digital games that include accessibility features is still limited, leaving people with disabilities aside from digital gameplay. There might be some who argues that this is not a relevant problem; after all, it affects a minority of the population. But that’s not the case: according to the World Health Organization, up to 15% of the world population has some sort of disability. That’s why we started working on improving the accessibility of serious games (a.k.a. educational) long time ago. After all, education is a universal right, and no one can be left behind!

So, why seems the videogame industry to leave people with disabilities unattended? We believe this is partly due to the high extra cost that this entails for developers. To make a videogame fully accessible it is necessary to produce new functionalities (e.g. text-to-speech support), new content (e.g. adapted versions of the graphics) and also, to do tons of new testing.

This problem motivated the work we report in our paper recently published in the ComSIS journal, titled “Towards a Low Cost Adaptation of Educational Games for People with Disabilities” (link and bibliographic information below). This paper describes our proposal to cut down the cost (i.e. effort) of making an educational game accessible. The idea is to generate an explicit game model that feeds a system that automatically or semi-automatically adapts the game to suit the needs of each individual. When we talk about automatic adaptation we refer to that a machine can actually do (if cleverly programmed), like for example adding a text-to-speech layer to the game. This is the perfect case since the extra cost is trimmed down to zero (all the additional work is done by a program!) but it is not always possible. For that reason, the system supports semi-automatic adaptations, which require some extra input from the author, but it is still considerable lower. An example of this type of adaptation is transforming a game for high contrast rendering, since the program will probably need to be fed with alternative versions of some resources to achieve optimum quality.

Ambitious, isn’t it? In this paper we prove it’s feasible also. We describe an experiment carried out in the eAdventure platform (obviously!), upon which we developed an architecture that allowed introducing accessibility features to the games automatically and semi-automatically for people with visual and motor disabilities. We analyzed the effort required for the author to configure those features, and the estimated effort invested in producing alternative content. The result was more than affordable, suggesting that this line of research is promising and should be further explored in the near future.

Example of semi-automatic adaptation proposed. The original game (left), as produced by the author, is taken by a program that adapts it to be rendered in high contrast mode. The adaptation combines (1) special filters that are automatically applied plus (2) some extra graphic assets produced by the game author.